So hands up… who knew you could sample extremely tasty and authentic Thai street food in the heart of residential Nunhead, South East London? Nope? Nobody? Well I can’t say I’m not surprised… Even as a resident South East Londoner, I didn’t. But as it happens, you absolutely can. I discovered such culinary delights at neighbourhood pub, The Waverley Arms. Yes that’s right, the nice pub that’s on the corner of Ivydale Road and Limesford Road, SE15. Known for it’s nice beers and super friendly relaxed vibes, set in a beautifully renovated Victorian pub, you’ll find some of the most delicious, genuine Thai food that you’ve ever likely to have tasted (unless you’ve visited South East Asia and eaten the street food there of course). 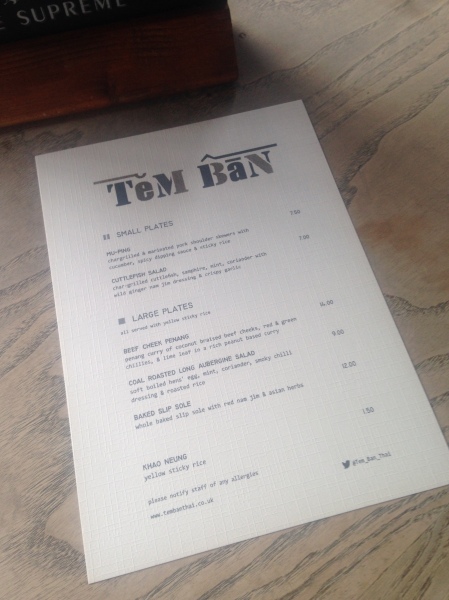 It turns out that The Waverley Arms is hosting a Thai pop up from Tem Ban every Thursday until the end of June. ‘Tem Ban’, which means ‘Full House’ in Thai, started as a pop-up at The Waverley Arms in April. If you like real Thai food, I guarantee that you definitely won’t be disappointed. Led by Chef Craig Broadhurst with Dan Turner working as his right hand man, Broadhurst was former Sous Chef at Soho’s Smoking Goat. Both learnt their Thai culinary skills at the highly regarded Begging Bowl restaurant in Peckham which also serves up Thai street food inspired dishes.

The Tem Ban menu explores the vibrancy of Thai street food. What I love is that compared to most Thai food served in Britain, it’s much less about sauce and all about flavour. All dishes are made using high quality British ingredients combined with South East Asian herbs and spices… for me it’s perfect. This is food that could be described as Thai tapas. So accordingly, you order multiple plates to share rather than dishes each. When I visited the plates I sampled were Mu-Ping, a tasty chargrilled and marinated shoulder skewers of pork served with cucumber and a spicy Thai dipping sauce, a Cuttlefish Salad flavoured with samphire, coriander and mint with a wild ginger and garlic dressing, and a Baked Slip sole, a whole fish cooked with red chillies and Asian herbs. I love good food with a lot of spice, and for me the taste I experienced was absolutely delicious.

Tem Ban serve up a thoroughly modern version of Thai food that Britain rarely sees. Just don’t expect any Green Curry slop. Expect super fresh, high hitting, fragrant flavours! If it’s a regular Thai curry that you’re after, please order from your local Thai takeaway via Just Eat or Hungry House. The Waverley Arms, which opened under new management in August 2014, provides the perfect setting for dining out, be it a laid back Sunday lunch or evening meal. When Tem Ban finishes at the end of June, Alex Sava will be running a kitchen takeover with European fusion pop ‘Eastern Bloc’. Watch this space.

4 thoughts on “Tem Ban at The Waverley Arms, SE15”