“Deptford??!!! How the hell do I get there??!!!” is the usual response when I mention this particular part of South East London. And that’s even from fellow South East Londoners! I know this as I had my birthday drinks in Deptford earlier this year and this was the standard reaction to the location. To put the matter straight, Deptford is pretty easy to get to from most parts of London! It has a mainline station which is only 10 minutes from London Bridge station, there are local DLR stations at Deptford Bridge and Elverson Road, and other nearby train stations include New Cross and New Cross Gate on the London overground (ginger) line, around a 10-15 minute walk away. Plus plenty of buses. So there is zero reason for thinking Deptford isn’t accessible.

Now to talk about the place itself! Wunderlust is a bar / restaurant situated at The Big Red on Deptford Church Street, practically next door to Deptford Bridge DLR station. The Big Red is an old London double decker bus which has been transposed next to The Bird’s Nest pub, an old gig venue, and converted into a restaurant with adjoining bar and seating and table area with a covered roof. The Big Red used to be home to The Big Red Pizza Bus which I visited once a couple of year’s back. That was ‘ok’. The pizza was fine (not great in my opinion) and the service, on my visit, was pretty poor. Needless to say I hadn’t wanted to return. Until it became Wunderlust that is. I heard good things about it and I’m pleased I made the trip. The recent reincarnation of The Big Red is in a league above, and I’ve visited a few times already this year, making the journey from deepest, darkest Forest Hill! 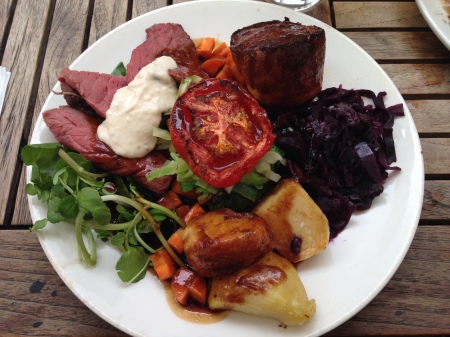 The reasons to go… Well firstly and perhaps most importantly, the food is really, really decent, and exceptionally priced for the standard of food you get. It’s run by street food stars Fleisch Mob (formerly based at The Paperworks at Elephant & Castle) and they take their food pretty seriously. I’ve eaten there twice and both times I have been super impressed.

The first time I ate here back in January I had a steak, which happened to be one of the best steaks I’ve had in London. I paid £17 for a 49 day aged South Devon flat iron steak served with mash, kale and beef jus. The taste of the steak was amazing, and the meat itself was incredibly tender. I’ve travelled around Argentina and ate a lot of good steaks there, but this was up there with the best. You’d pay an awful lot more than £17 to eat steak like this in most good steak restaurants  in London. The second time I ate here more recently was on a Sunday and I had the roast beef. Once again, the meat was cooked perfectly and the accompanying roast potatoes and vegetables were cooked to perfection. You might think they are a one-trick pony and only the meat is good, but my friend chose the veg roast option which was a Mushroom & Feta Wellington served with all the trimmings. She said it was one of the best veg Sunday roasts she’s had. So top marks for food all round. 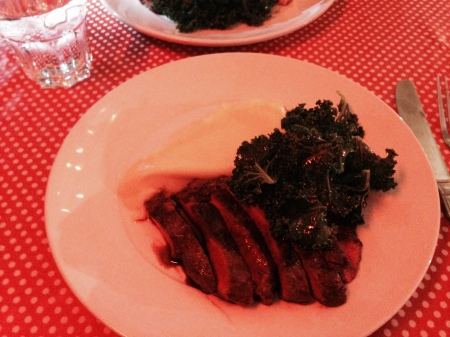 Secondly, Wunderlust is just a really, really nice place to hang out. If you’re looking for a smart, fancy restaurant then it’s not the best option. But if you’re looking for somewhere friendly, relaxed and a little on the quirky side then it’s just perfect. I ate the to-die-for steak on the bus itself which is atmospheric and cosy. The seats have been turned into two and four-person booths with cute table lamps for lighting. The novelty of sitting and eating on a vintage London bus never wears off. I enjoyed my Sunday roast in the seating and table area designed with wooden cladding next to the bar, which was really nice on a bright afternoon (when the bus can feel a little on the dark side). A covered roof means it’s fine to stay outside even if its raining. At the moment they have some fab art prints on the side of the bus by Luke Merryweather, supplied through Deptford does Art, which is a nice touch. It’s super chilled out and they book good DJs to play on the decks next to the bar on Friday and Saturday nights as well as Sunday afternoons. There’s a small area which doubles as a dance floor next to the bar, so when they stop serving food and the drinks start flowing it has the perfect party vibe. It’s a great location for a party in fact. The staff are all really nice and friendly, service has been great every time I’ve been. Creating the right sort of ambience is clearly very important to the owners, and they have nailed the atmosphere perfectly. 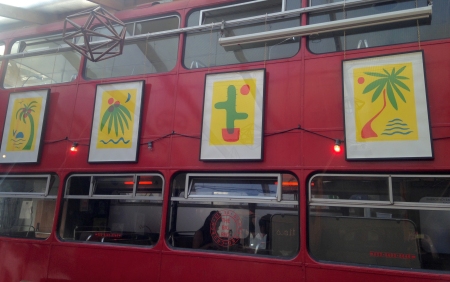 Art prints by Luke Merryweather from Deptford does Art

Last but not least, the booze options are first rate. The bar is well stocked with a superb collection and variety of spirits, local craft beers and decent wines. The staff can make a mean cocktail, and as with any decent bar you can order any cocktail you want, even if it doesn’t appear on the menu. The bar staff really know their stuff when it comes to drinks. Put it this way, it’s the type of place you always end up leaving more than a little tipsy, having drunk more than you originally intended…

Wunderlust is only open on Fridays, Saturdays & Sundays for the next two months. Be sure to check it out. It’s well worth the trip to Deptford, I can guarantee it.

One thought on “Wunderlust, Deptford SE8”